I served aboard the USS America from May 1987 to December 1989. During that time, I participated in a North Atlantic Cruise, Mediterranean-Indian Ocean Cruise, and Suez Canal Transit.  I was assigned to V-2 Division Arresting Gear, and ended up working on the flight deck.  My duties consisted of deck checker, hook runner, deck edge operator, and finally arresting gear flight deck petty officer.

The photo of CDR Snodgrass was taken in 1988, the day before an airshow.  I learned from an announcement over the 1MC that an airshow was under way (I learned later it was practice for the show to be held the next day).  I went up to the flight deck and snapped two photos during a practice run.   I focused on the plane as it approached the fantail on the carrier’s port side and went into a banked turn (the plane was almost vertical!). I took two photos in quick succession.  When I had the film developed, I couldn’t believe what I was looking at. Pretty much the F14 was centered in the frame.  What luck!!  I showed the photos to some colleagues in the arresting gear, and they were surprised when they saw the photo.

I showed the photo to Airman Brogdon, who also worked in the arresting gear, but at the time was assigned to S-5 Division, which takes care of the officer quarters.  He happened to know the pilot CDR Dale Snodgrass, because he was taking care of CDR Snodgrass’ stateroom.  Through Brogdon, I was able to meet Snodgrass and got him to sign an 8x10 of the photo.  Snodgrass was surprised when he saw the photo and I loaned him the negative to make a copy for himself.

For those of you who are interested I took the photo with a Canon T70, borrowed from my brother Chris Silva (who wanted me to take some photos for him).  I should also note that I took more photos the day of the airshow.  Everything, from me having a decent camera, having the opportunity to take the picture, to meeting Snodgrass himself was luck or coincidence. 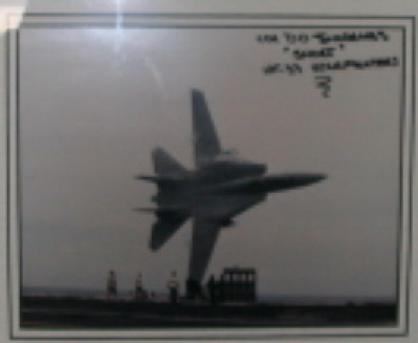 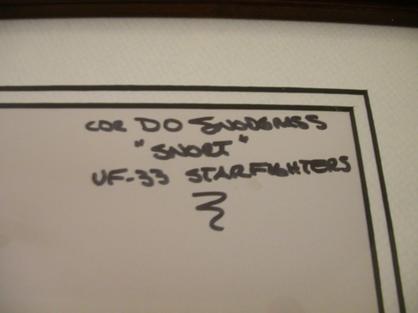